Various devices such as electronic scales have a serial port output. The Serial Port Device module is designed to simplify collecting data from these devices.

The Serial Port Device Parser has some preset configurations that can be used to setup the device such as for the Mettler Toledo scale.

When the device receives the command from the computer it replies back with a string containing the value. In continuous mode, the device continually sends the updated values.
The Reply Parser reads the reply string and reads the value in the string.
Ignore until value tells the parser to ignore all characters in the string until it finds one of these characters. For the Mettler Toledo scale, we tell the Parser to ignore all characters until +-1234567890, ie: until it finds a number in the string.
Extract Until value is used to find the end of the number. In the case of the Mettler Toledo scale, this value is ‘ ‘ or a space. The parser will read the number until it reaches a space.
The Min. # of Bytes is used to make sure that the parser waits until it has received enough bytes of data. 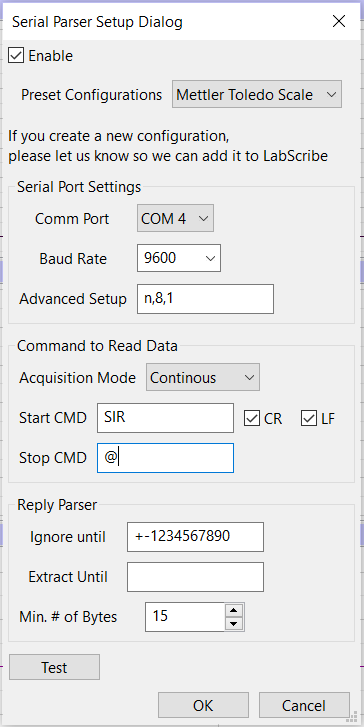